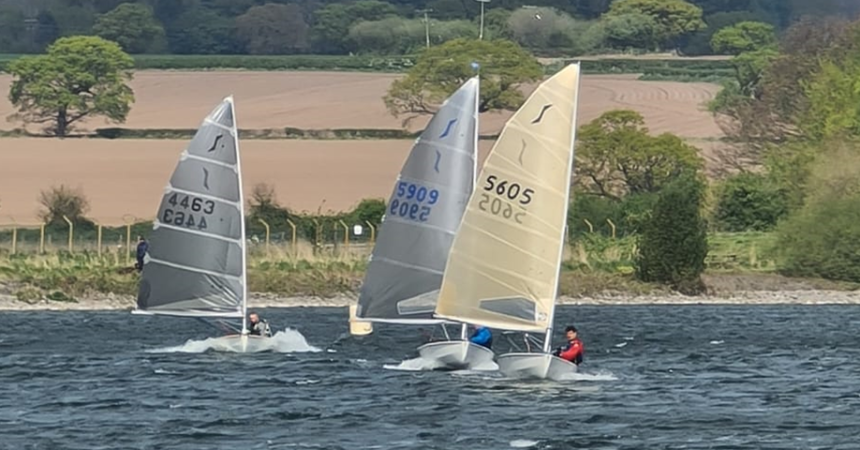 On St Georges (April 23rd) ’22, the Northern Solo Circuit crossed the border into the land of dragons. With many Jones’ a Huw and a Gwyn in the Shotwick home Solo fleet their was no doubt that the travellers were now in Wales (just).

Due to a blustery forecast only 7 boats took to the water. A favourable wind direction meant that the lake could be used to its full potential, with the race officer Gareth Henshall setting two leg busting beats the full length of the lake with a combination of flat out broad reaches and running to get back down. This offered plenty of tactical options and made sure that minds and tactical nous would be well tested as well as sailors bodies.

Race 1 kicked off at 11:00 and we already had our first casualty with a kicker letting go just before the start. First race was led from start to finish by Shotwick’s own Gordon Bennell (5605). A gybe mark positioned very close to the shore made for some great viewing and entertainment as it quickly appeared to become the hot spot for a swim or two. Kieran Lewis, Shotwick Lake (4463) finished in 2nd closely followed by Andrew Fox flying the flag for Leigh & Lowton (5909)

This race was followed by a well-earned lunch break and for the first time in two years our galley was back open serving tea’s, coffee, and bacon butties. After a quick re-fuel the sailors ventured back out onto the water for the final two races which would be back to back.

Race 2 started in a very similar fashion to the first race and the spectators thought the event may already be won. As Gordon continued to stretch his lead Kieran and Andrew tussled for 2nd place again. That was until the gybe mark by the shore, Gordon came flying in planing in on a massive gust, all was going well, full commitment, until splash! The boom hit the water and he went swimming. This opened the door for Kieran and Andrew to sail on past. Kieran went to sail onto the win with Andrew 2nd and Gordon recovered to 3rd place.

This meant that after two races it was all to play for in the final race. Whoever won Race 3 would win the event overall.

Race 3 kicked off shortly after the finish of Race 2, now only three boats remained on the water, the attrition of the conditions leaving many “broken” bodies on the shore. This was a final race shoot out between the top three. SailGP (like) in scale, winner takes takes all. The three sailors started off tentatively sticking together. Neither helm wanting to make the first move and possibly end out on the wrong side of a shift. It was fairly evident that legs were starting to suffer and hiking power was starting to fall of. Especially for the lightweight young gun Kieron who was on his first break after recently joining the Royal Navy. Each gust coming down the lake sapping energy leading to a swim at the gybe mark for Kieron. It was now between Gordon & Andrew. A gladiatorial one on one where they were fighting the conditions as much as each other. The battle ebbed and flowed over the four lap race with Andrew Fox finally eking out a lead and building which turned out to be insurmountable.

This meant, as seems to be a reoccurring habit due to how close the racing is at Shotwick, that we had a three way tie at the top. With countback going to the result of the last race.

After a day of hard racing, lots of capsizing and plenty of laughing from the shore Andrew Fox took the overall win, Gordon Bennell came in 2nd and Kieran Lewis in 3rd.

It was great to have some visitors come to the open despite the windy forecast and hopefully we will get even more next year.

Results Can Be Found Here

Diolch Yn Fawr and hope to see you next year

YOUR CLUB NEEDS YOU