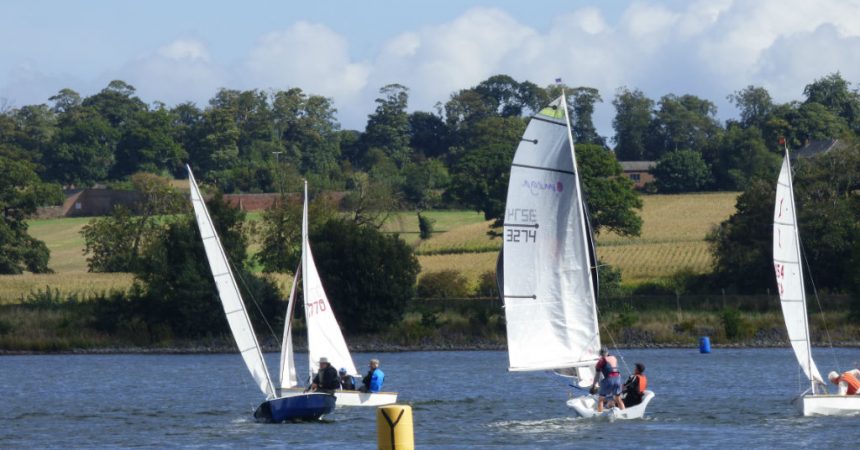 The new format of just two races for the Summer Club Regatta was a great success with an entry of 20 boats.

The sun didn’t shine but the wind was kind and built gradually during the day from a pleasant force 2-3 in the morning to a lively 3-4 for the pursuit race in the afternoon.

The morning handicap was won by Dave in his Streaker followed closely by Callum and Kieran in their Optimists. Fourth place went to Ian (D-Zero) and an impressive fifth to Carole sailing her Streaker.

The pursuit race provided plenty of entertainment and there was close racing throughout the fleet. However, nobody could catch the three Optimists although Bill was closing the gap fast in his Topper.

The secret to success in a two-race series is consistency. Kieran and Callum demonstrated this by both finishing with 4 points, with Kieran taking first place on tiebreak.  In third place was Mark (D-Zero) with a 5th and 6th.

First double-handed boat was awarded to Tim and Jayne in the Wanderer.

The Spring Morning Handicap was dominated by Gordon (D-Zero) with a string of first places. Jeremy, also in a D-Zero, finished a comfortable second ahead of Cliff (Laser) in third place.

It was great to see some of our “non-racers” having a go in this series that is run on a personal handicap system. The purpose is to encourage anybody new to racing to have a go and join in with a more relaxed atmosphere!

Midway through the series and competition is tight at the top. Four boats are pulling away in front; Dave, Kieran, Jeremy and Conrad although there are plenty of races remaining for somebody else to come along and grab victory!

The Summer Morning Handicap Series comprises 2 back-to-back races each week with the usual start time of 10:30.

The afternoon race in both the Summer Series will be run based on Personal Handicaps.  Hopefully this will make it more interesting (and fun?!) for those newer to sailing while at the same time making it more challenging for those usually at the front of the fleet.  It should also help those with less competitive boats.

Personal handicaps have been adjusted following completion of the Spring series and the winning boat each week may see their handicap reduced!

Please come along and join in especially if you are new to racing. The emphasis is on fun and if you need advise please ask – there are plenty of “experts” willing to share advice.  Also, if you have a 2-man boat and would like an experienced crew for an afternoon please let one of the committee know and we’ll try and sort something out.