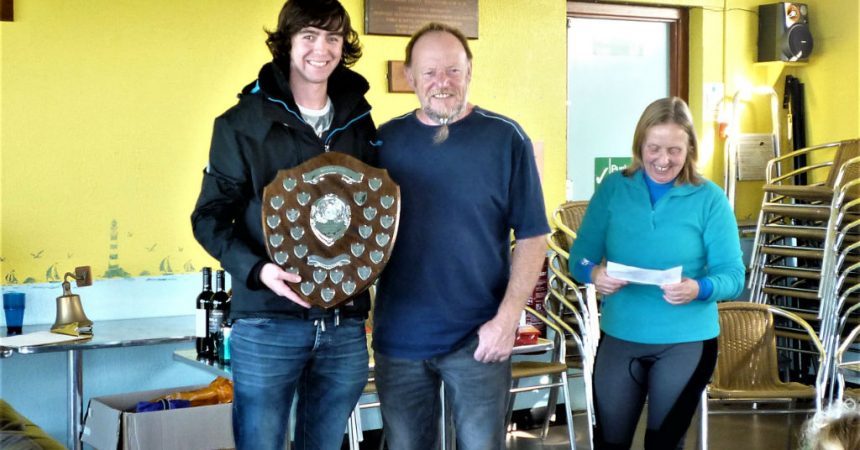 A very enjoyable Miracle Welsh Area Championships took place over the weekend of 16th/17th September at Shotwick Lake Sailing Club.  There was a great friendly holiday atmosphere throughout the weekend (which is usual for the Miracle fleet!) coupled with good weather and fair winds.

Shotwick Lake is situated on the edge of the Dee estuary just inside the Welsh border making it relatively easy to get to.   There were 10 boats with visitors from the east and west coasts, the Midlands and the northwest. It was a really great turn out, with folk arriving from Friday night pitching tents and relaxing in the clubhouse together for the evening. On Saturday morning, thanks to Shotwick Lake Sailing Club’s committed volunteer galley staff, the club soon became a thriving place with the smell of bacon butties wafting from the clubhouse, giving a warm welcome to the campers and Saturday arrivals.

Everyone seemed to enjoy the sailing including the club sailors who joined us on the Sunday for the Club’s Autumn Regatta, which worked very well and made for a lively water! Northerly winds blew across the lake over the weekend resulting in many short beats and challenging spinnaker legs but really great spinnaker practice!  And a great work out too by the end of the two days.

The winds really picked up throughout the weekend and Dave and Zara Turtle just didn’t eat enough cake to hold on to the trophy! The trophy went to Dave Butler and Ross Flemming, adding the Welsh title to the Nationals that they won earlier in the year.  However, victory was not assured until the last leg of the last race due to Dave and Zara from the home club putting up a good battle in an effort to retain the trophy.

Almost everybody had their moment of glory or excitement during the weekend, ranging from mishaps to successes. In the first race it was Ian and Lily Brown (Delph) who stormed up the beat to lead around the first mark! However, it was Dave and Zara who claimed first bullet of the weekend finishing just ahead of Dave and Ross (Welton).  Third place went to Graham Watts and Helen Jacks (Staunton Harold).

The wind had increased gusting 18 knots for the second race. This suited Wayne and Angela (Delph) who took the lead at the end of the first lap, holding off a challenge by Dave and Zara, to lead the way home. Third place went to Dave and Ross.

We were joined in the afternoon by Ken and Gillan without their boat, but they had been checking out Bala for next year’s Miracle Nationals. It was a nice surprise to see Gillan’s smiley face as she helped the boats up from the shore. By the end of the day everyone was ready to enjoy a hearty meal together.   The Shotwick galley team and caterers did us proud and they joined us for the meal making for a good social evening together.

The conditions on Sunday were very similar with lighter northerly winds in the morning that steadily increased through the day.

Dave and Ross found their form in the third race with a narrow victory over Dave and Zara. Wayne claimed third place sailing with replacement crew Catherine Hardy (Angela apparently had a better offer involving golf?!).

The final two races were held after lunch (more cakes!) and race four was led from start to finish by Dave and Zara building a good lead from Graham and Helen in second place and Dave and Ross in third.

The series allows for 2 discards so the championship depended on the outcome of the final race. This time it was the turn of Geoff and Kieran (Shotwick) to sail a masterful first beat to lead around the first mark!  However, Graham and Helen soon took the lead closely followed by Dave and Ross leaving Dave and Zara someway adrift.  As the race progressed Dave and Ross moved to the front with Dave and Zara gradually closing the gap to mount a late challenge and even drawing level at one point.  But superior spinnaker work (or more pie and cakes?) allowed Dave and Ross to power away on the tight reach to the finish to take the final bullet of the day and with it the title.

At prize-giving Dave thanked everybody at the club who made the weekend so successful: the race officers, safety crew, galley and the competitors and organisers.

This is the third year the Welsh Area Championship has been held at Shotwick and it has grown and embedded as a main stay in the schedule of Miracle away events. Thank you to everyone who came and made it a great weekend and a BIG thank you to Shotwick Lake Sailing volunteers who made it possible for us. It is apparent that the more we get together like this, the more we become a great a big family and it all becomes about so much more than sailing,

A great weekend! I hope you’ll join us next year!