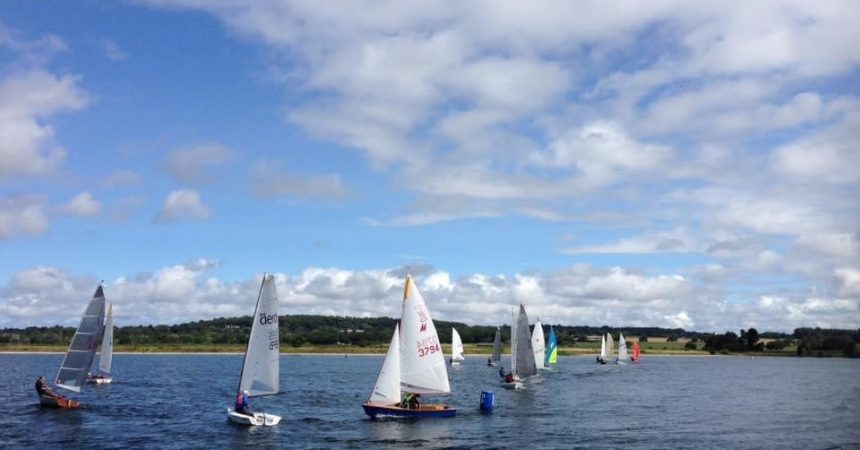 The much awaited return to racing was successfully managed on Sunday 2nd August.  It has taken much time and effort by our committee to interpret and comply with all the latest government advice and it was just reward that the organisation on the day went so smoothly.

It was a bright and breezy morning and the day started with a comprehensive briefing by our commodore, Tim.  This worked well since the start of the first race had been delayed slightly to allow the forecast wind to abate, because one of the new rules is for the wind speed not to exceed 20 knots at any time during the racing period.

The north-westerly direction meant that the wind was blowing diagonally across the lake and the course set had three good beats and some fast reaches making full use of the sailing area.  Sixteen boats made it to the start-line for the first race and both races started without incident.  In fact it was good to see that throughout the day all sailors were being considerate and conservative as per the guidance!

Jon in his Laser had an excellent day and led both races from start to finish with more than enough gap to win comfortably on handicap.  The rest of the fleet was much closer with Kieran and Mark neck-and-neck in both races with Kieran just coming out in front – a good result for his first race in his newly acquired Solo.  Dave and Dav sailing a Miracle, the only double-handed boat, managed to split the leading Solos on handicap with Jeremy in the Lightning always in contention.

Sun, wind and good competition, it was a great day after so many months of lockdown.  Many thanks to Gaz for running the races, Tim and Jane on Safety boat and Ron as Supervising Person (another new role to comply with the guidance!).