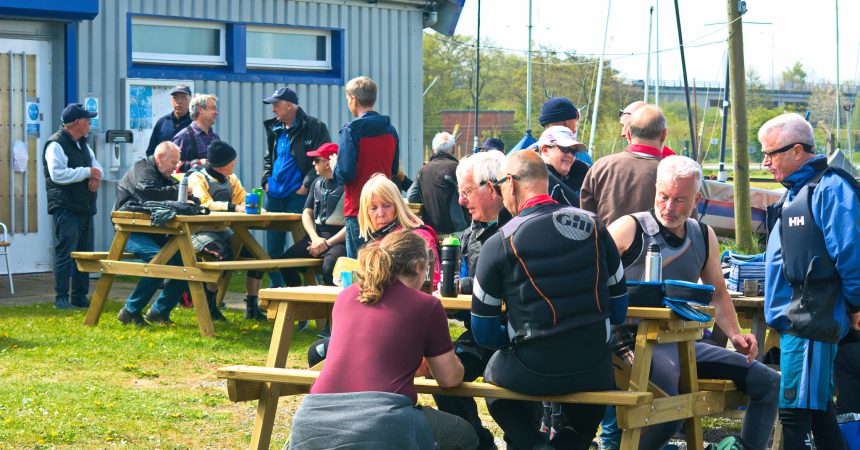 There was a fantastic turnout of twenty boats representing seven different clubs for the first round of the 2022 Border Counties Midweek sailing series at Shotwick Lake.  Competitors were greeted by the smell of bacon butties and it was good to catchup with friends and welcome newcomers to the events.

There are no age restrictions for the series that comprises seven events in the North Wales and Cheshire areas. In fact, ages ranged from an impressive combined age of 162 years for Brian and Ros in their National 12 to the slightly younger.

There was a pleasant south-easterly wind that became lighter and shiftier through the day as it battled with a developing sea-breeze from the opposite direction.

Race team Ron and David set some excellent courses throughout the day and opted for one race in the morning before a leisurely lunch in the sunshine followed by two back-to-back in the afternoon.  The safety crew, Jeremy and Mark, didn’t see too much action although there was one capsize who shall remain nameless, but she recovered quickly and was still smiling!

Racing was keen throughout the fleet with plenty of place changes as fortunes changed in the shifty conditions.

The first race started cleanly with a beat diagonally across the lake and the faster Supernovas and D-Zero shot off into the lead.  However, on the second beat the wind veered which favoured the slower boats with Dave in the Comet taking full advantage and rounding in second place.  Meanwhile the two Miracles were having a good battle with Ellen and Pete just winning out against Simon and his dad.  At the end of the race the faster boats had failed to open up a sufficient gap leaving Dave (Comet) in first place, Phil (Solo) second and Bill (Solo) third.

The wind started to play tricks at the start of the second race which resulted in a rare general recall. However, everyone was away on the second attempt and once again the faster boats were well ahead from the outset and this time made no mistakes finishing well ahead. Pete and Eric in their Supernovas finished first and second with Dan in the D-Zero third.

So, it was all to play for in the final race with any one of six boats in with a chance of overall honours.  It turned out to be a race of “snakes and ladders” with the long run down the length of the lake being particularly challenging as the wind swung one way and then the other!  However, the faster boats failed to breakaway making it very close on the water with the top ten boats all finishing within about a minute of each other. After handicap adjustments, it was another convincing win for Dave in the Comet followed by Phil (Snewin) in second and Bill and Phil (Proctor) tied for third place, all in Solos.

At the end of the day, the top three overall were Dave (Comet, Shustoke), Phil (Solo, Chester) and Pete (Supernova, Winsford).

First double-handed boat for the second-year running was Mark Nield and his dad (making what seems to be an annual appearance) in their Enterprise.

Highest placed Shotwick boat was Paul Newman in his Streaker.

A great day on the water was rounded off by prize-giving outside of the clubhouse.  Thanks to everybody at Shotwick for making it such a success, especially the race teams and Dot and Dav who were on hand to provide refreshments throughout. Also, a big “thank you” to Dave Thomas for continuing to organise the series and, of course, to all the competitors without which there wouldn’t be a series.

The next event in the series is at Budworth on Tuesday 17th May so why not join us?  Check the website below for further information