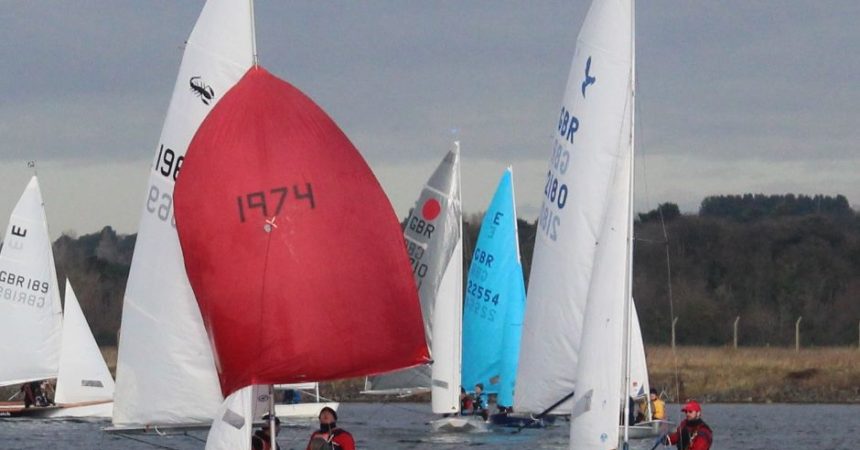 Only the very keen (or foolish?) arrived at Shotwick Lake on Sunday morning (4th March) for the final race of the Brass Monkey Open Handicap Series.  Competition was tight with any one of five boats being able to win the series.  The snow had turned to rain but the wind had disappeared and sailing was in doubt until shortly before the start.  However, right on cue, the wind filled in from the southeast as forecast and the rain stopped; the competition was on!

Kieran (Streaker) was quickest off the start and picked his way expertly up the beat to follow Gordon’s DZero around the first mark with Dave (Streaker) and Gaz (Solo) in hot pursuit.   Gordon gradually pulled away but would it be enough to overcome his handicap?  Dave found a little extra pressure downwind that was just enough to overhaul Kieran but there was never any time to relax.  Small mistakes could be costly and comfortable positions soon threatened.  This proved to be the case on the last lap when Gaz closed the gap on the Streakers and there was an anxious time while the results were calculated.

The series had been a great success with 24 boats competing of which 7 were visitors from local clubs. There was a good range of winds from very light to very strong whilst temperatures varied from very, very cold to even colder!  Last year it was Storm Doris that tried to disrupt proceedings and this year it was Emma and the “Beast from the East” but once again all five races were completed.

After the number crunching (by Dave!?) it was Dave who took the win and with it the series.   Gordon was a close second with Gaz just one point behind.

First visitor was Dave Thomas (Solo, Gresford) in sixth place and first double-handed boat was awarded to Mike Harvey and Reg Binnersley (GP14, Chester) who just moved ahead of Steve and Liz Harrison (Hornet, Chester) on the final day.

Thanks go to the various race officers, safety crew and assistants who braved the elements and helped make the event so successful.