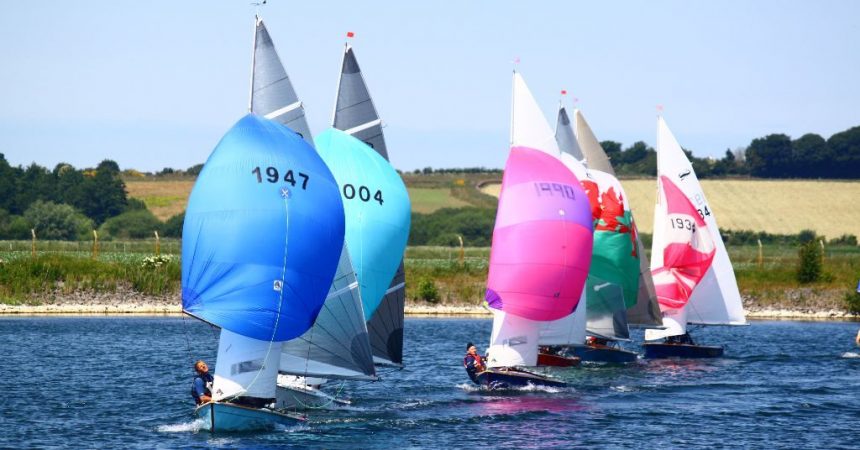 A mirror like lake greeted the 13 boats (7 travelers from Pennine and Dovestone and 6 home boats) as they arrived for the 2013 Scorpion Open @ Shotwick Lake.

However, as the morning warmed up the Sea Breeze kicked in and Race 1 started in a building F2-3.
After the first lap the home boat of Carl Jones & Shellie Jones led closely followed by Andy McKee (who sailed to 3rd place in the Flying Fifteen Worlds last year with our own Richard Jones) & Tarren Jones (Dovestone) and Steve Walker & Jerry Hannabuss (Pennine). After the following hotly contested laps and multiple position changes Andy & Tarren came out on top from Steve & Jerry, with Pete Crowther & Dave Thompson (Pennine) slipping past Carl & Shellie to take Third.

After a short break lunch Race 2 got underway in a still building breeze. The home team of Richard & John had a poor start having to duck boats on Port tack whilst Andy & Tarren and Steve & Jerry managed to get their noses ahead as the fleet surged towards the first mark.

Carl & Shellie having a few teething problems with their new spinnaker system had headed in for an early cup of tea while the other crews fought it out on the lake. Andy & Tarren edged into the lead and managed to hold onto first making it a double bullet and Open victory.

Another short break and some fiddling with the spinnaker system on Carl & Shellie’s boat and Race 3 saw twelve boats on the water for the start in a breeze that was still gently building.

Richard & John had a fantastic start, getting to the windward mark to find themselves completely clear of the chasing pack. They managed to stay ahead for just over a lap when Andy & Tarren managed to sneak followed by Steve & Jerry and then Chris Massey & Geoff Edwards (Dovestone).

The Final Results can be found here

A big Thank You goes to Ron King and his team for running the event and as always our marvelous Galley Ladies for keeping everyone fed and watered throughout the day.

The Shotwick Lake Summer Afternoon Handicap series is a 8 race event with one races each Sunday afternoon.  If there is sufficient interest, Juniors will have their own event. Race
Jul
6
Wed
2022
7:00 pm Twilight Series
Twilight Series
Jul 6 @ 7:00 pm – 8:00 pm