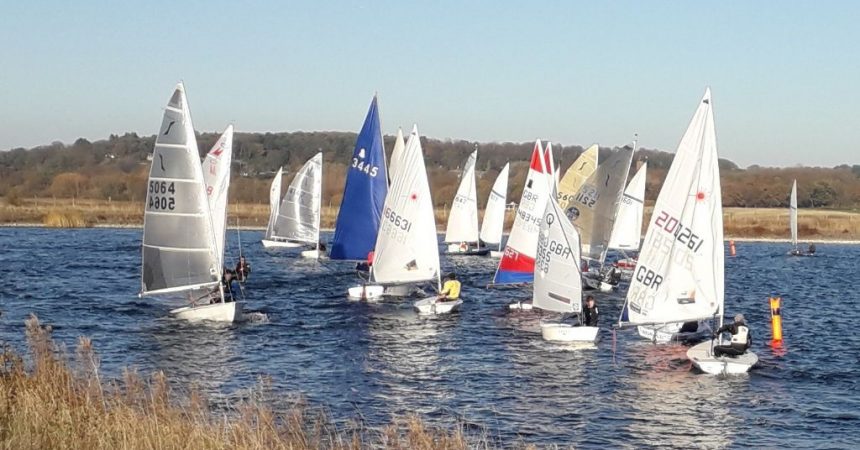 The arctic weather of the previous week failed to deter competitors for the first race of the Brass Monkey series. There was a fantastic fleet of 24 boats swelled by 8 Toppers from the regional training squad.

After removing blocks of ice out of boats and thawing the sheets, all of the sailors were kitted up and on the water for the eleven o’clock start.   The gentle southerly breeze was too light for some but at least it was slightly warmer in the sunshine than on recent days and nobody fell in!

It was quite crowded on the start line but the fleet were away at the first attempt and with the first mark right outside the clubhouse the spectators had a perfect view. Although only a short beat, the usual contenders led around the first mark with the Solos of Gaz and Gordon taking an early lead.

Everyone was closely packed after the first lap with Dave (Streaker), Kieran (Laser Radial) and Paul/Gordon (Omega) chasing the two leading Solos.   It was great to see close racing throughout the fleet with the Toppers having their own personal battles.

The wind started to fade and, as the race progressed, Dave made his way to the front finishing just far enough in front of Gordon to win on handicap with Gaz third, Paul (Streaker) fourth and Jeremy (Lightning) fifth. First Topper was Matthew from Llandudno Sailing Club in a very respectable 8th position.

Full results can be found here:

It’s not too late to enter so come and join the fun! There is just one race each Sunday for the next 4 weeks, start time 11:00hrs.