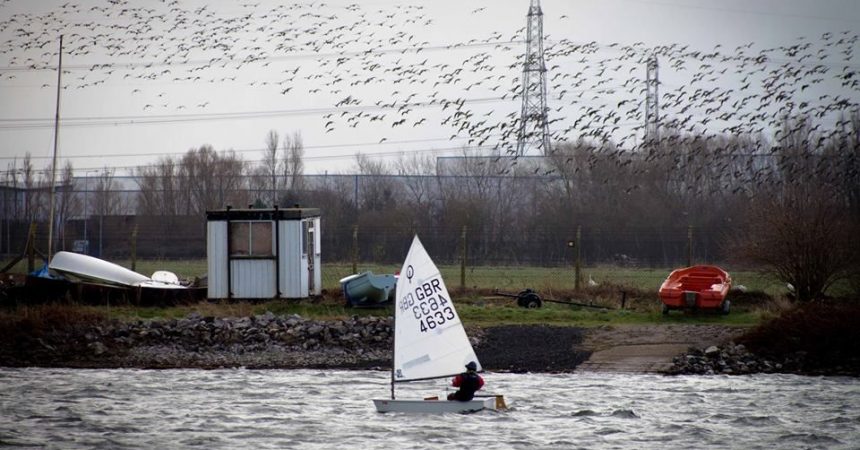 Sunday the 1st of February saw the start of Shotwick Lake’s 2015 season, and the first race of the inaugural Brass Monkey.

With a steady F5 (avg.25kts) blowing from a NNW direction an uncomplicated, mainly reaching course was set up for the 5 visitors and 9 home boats that had signed on.

After a 15 minute delay to allow for the wind to calm down a little, six boats took to the water, the others deciding to stay within the confines of the warm club house with cup of tea in hand.

In tough conditions, none of the competitors decided to try and push the line, rather opting for a safe start. Home boat Paul Newman & Mark Nield (Shotwick, Scorpion #1681) were first up the beat toward the windward mark, closely followed by Alan Roberts & Rhea Burton (Royal Navy/Pilkington Enterprise #22600) and Steve Harrison & Liz Gallimore (Chester RS400 #1001). Mike Harvey & John Harvey (Chester GP14 #13848) managed to get across the line but suffered a breakage on the first lap forcing to them to retire, as did young Kieran Lewis (Shotwick Optimist #4633) deciding that despite the conditions being nothing to put the competent young sailor off, the cold was starting to effect him (despite dry suit and multiple layers). Stuart Hopson (Shotwick RS300 #383) late onto the start line after rigging issues also made the start, but later was to retire with equipment issues.

Newman & Nield continued to stretch their lead on the water over Roberts & Burton and Harrison & Gallimore dropping back due to a capsize on the first gybe mark.

A good hour was given to the surviving competitors as there was only a single race and due to the amount of fun that was being had, especially by the Scorpion sailors, demonstrated by the amount of laughing that could be heard resonating from their boat each time the past the race team.

After the race Alan Roberts retired the Enterprise due to possibly missing a mark. This probably would have made little difference to the winner Newman & Nield who take the bullet, Harrison & Gallimore moving up to take the second place.

Looking forward to next week, conditions are forecast to be in complete contrast with much lighter winds swinging around to the South.

Hopefully this will see the belated first race of the new D-Zero fleet as well as many more boats on the water.

We have pictures courtesy of Les Mather which will be with us soon. Keep an eye either here or on our Facebook pages

Results Can Be Found Under the sailing menu above